A little over a year ago, I released my iPad game Mahjong Cards. It’s the classic game of mahjong solitaire but with a simple twist: it’s played with a regular deck of playing cards instead of Chinese tiles. 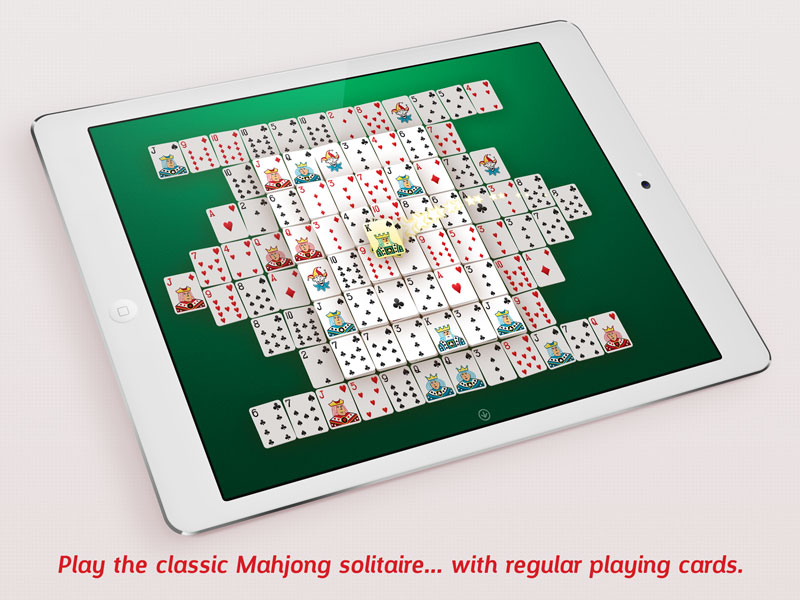 I’ve pretty much neglected the game since the initial release because I’ve been busy with other things. Earlier this week I decided to take stock and make some decisions about the future of this app.

Because I always find these “look at how much/little money we made with our app” posts interesting to read, I thought I’d share my numbers with you.

NOTE: This isn’t a post where I’m complaining how hard it is to make a living on the App Store. This post is just a reflection on what I did and what results it had. Maybe you’ll find it useful.

The game I never should have finished

Mahjong Cards has been over three years in the making, part-time, and I estimate I’ve spent one full person-year of actual effort on it.

Apart from the level designs, I did everything myself: the coding, graphics, sounds, and so on. The whole thing was a ton of work and I wasted ages on the technical challenge of getting the game to perform well on older iPads. For such a simple game it’s quite graphics intensive.

That’s a fulltime job for one person for one year. Take a nice contracting rate and multiply that by 2000 billable hours and you get the amount it cost me to develop this. It’s not impossible to recoup that on the App Store, but it’s a longshot for an indie working alone.

There were times when I was tempted to stop working on the app. In fact, I should have. But I am stubborn and decided to stick with it instead of cutting my losses early. This was a conscious decision – I’m well aware of the sunk cost fallacy – just a bad one.

True, I could have spent that time on something more profitable, but part of me wanted to make this game because I felt nostalgic for the days when I made games on the Amiga with Blitz Basic and Deluxe Paint and wanted to relive that again. (Yes, I’ve got that out of my system now, he he.)

The game that I ended up releasing was OK, but not as awesome as I wanted it to be. But it was a matter of ship now or ship never. And I’m glad it finally did ship, warts and all.

But that was all one year ago. Now let’s talk numbers.

There were two versions of the game, a paid version and a free version with ads, both for iPad. An iPhone version was in the works but I decided to drop it as I had already spent too much time on getting the iPad version out the door.

The paid version started out at $2.99 and hardly sold anything after the first few days. After a few months I dropped the price to $0.99 with no change in sales numbers. As I write this, it sells one copy every 2 or 3 days.

In total the paid version had about 600 sales with €640 profit. Not very encouraging, but not a big surprise either. It’s pretty clear by now that people don’t like paying for games up-front.

There are two types of ads in the game: a banner ad at the top that appears when you visit the menu screen and a fullscreen “interstitial” that appears after the player has completed a level.

I used AdMob mediation with a few different networks: AdMob itself, MdotM, and iAd. The plan was to add new networks over time, but this proved quite time-consuming and not very fruitful. RevMob is apparently supposed to be great for interstitial ads but AdMob mediation does not support them.

Total ad revenue to date is about €7,400. The vast majority of this comes from one party: AdMob interstitials. MdotM did OK in the beginning but then dropped off. iAd counts for about 0.5% of total ad revenue. Income from the banner ads on the menu screen is negligible.

Currently, AdMob brings in about €600 per month. That’s OK for a passive income stream but at this rate it will take a few decades to recoup my time investment. ;-)

Putting the numbers together: one install results in €0.35 of ad revenue. From what I’ve gathered, this is fairly high. The eCPM on the AdMob interstitials is pretty good. Plus people keep coming back to my game.

Lots of people play solitaire games in their off time, often for hours on end. That’s a lot of opportunities to show them ads. However, you don’t want to go too far. Many games show a banner ad at the top or bottom of the screen at all times, but these go largely unnoticed as it’s very easy to tell your brain to ignore that part of the screen.

Something that might work better is the approach taken in Angry Birds Free. Their banner ads slowly fly into the screen and then disappear ten seconds later. The movement animation grabs your attention so you’re less likely to tune out those ads. I had considered this for a later update, but given the poor performance of banner ads I don’t think it’s worth it.

It’s harder to ignore interstitials than banner ads, because they take over the whole screen. In the case of Mahjong Cards, people only get the ad after they’ve achieved something (completed a level), so they don’t mind it so much. Just over 1 million of these ads have been shown so far.

Yes! Even though I kinda regret making this game because of the huge time sink it was, at least something good came out of it: people enjoy playing it.

I know this because of the 4.5-star rating and because the game gets played a lot – the players keep coming back.

The app analytics show that so far 1.4 million levels have been started, of which 1.2 million were completed. It takes about 10 minutes to play one level and the analytics corroborate that. On average, people play just one level and then put the game down again. But there are also people who play it all night long!

1.4 million sessions divided by 21K downloads is an average of 66 sessions per player. So the game is sticky enough. I should be able to make that work in my favor somehow. :-)

I did not do a whole lot of marketing because my time budget had run out.

There was the obligatory press release and a number of targeted emails at review sites. The game only got picked up by the Dutch website iCulture.nl – me being a Dutch indie developer probably had more to do with that than the actual game (thanks anyway, guys!).

I think it’s hard for reviewers to get excited about this game. It’s just another mahjong game with a tiny little twist. So it’s hard to get press for it; there isn’t an interesting story to tell.

Still, I could have tried harder. There must be ways to reach people who like playing solitaire, card games, board games, and tell them about this game.

The future of Mahjong Cards

Given these numbers, I took some time this week to cut everything that didn’t perform well:

This new version is currently pending review. Now that I’ve gotten rid of what doesn’t work, I can start thinking of the future for this app. There are plenty of new features I would like to add but anything I do from now on should be done with the goal of making the game sell better.

The players like it, so the product is good. The interstitial ads do well, so the revenue model works. My biggest challenge is to get more people to download it.

The new iTunes Connect analytics show that for every 5 people who view the game in the App Store, there are 2 who download it. That’s a conversion rate of 40%, which is not too shabby. If only I could get more people to look at the damn page. :-)

I hope you found this useful!